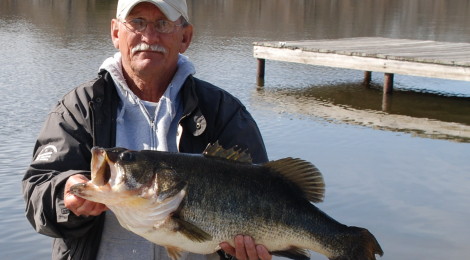 Rip van Winkle slept for 20 years. Lake Athens snoozed for 25. Then the 1,799-acre lake near the East Texas town of the same name awoke from its slumber and began spitting out 13-pound bass.

Kirk was fishing in 15 feet of water near the dam using an Alabama rig, which resembles a school of small fish. The water temperature was 47 degrees at the time of the catch, 1:30 p.m.

The first ShareLunker ever from Lake Athens came in 1989. Then on December 30, 2013, Jason Hanson of Athens caught Toyota ShareLunker 551 from the lake, a 13.76-pounder. The lake record largemouth bass weighed 14.19 pounds and was caught in 1988 outside the ShareLunker season dates.

The lake is managed under a 14- to 21-inch slot limit; anglers may retain only one fish per day over 21 inches in length.

“Lake Athens has been stocked frequently since 2003 with fry, fingerlings and in some cases adult pure Florida largemouth bass,” he said. “Any or all of these stocking events could have contributed the genetic potential to produce 13-pound fish. The fact that the first fish caught this year was positively identified as a pure Florida suggests that it could have been a fish produced at the hatchery from our hand-selected brood stock. If it had been one of the adult surplus brooders, it would have still carried an electronic tag identifying it as such.”

Ott also noted that Lake Athens is currently enjoying what he called the “Goldilocks Effect” of “just right” aquatic vegetation growth. “Over the past five to six years there has been a proliferation of several species of native aquatic vegetation that is providing optimal conditions for the fish and for anglers catching these fish,” he said. “Too little vegetation and bass recruitment suffers due to predation; too much vegetation coverage reduces growth rates. Every extra year it takes a fish to grow to trophy size is another chance for natural mortality to remove that fish from the population. Finally, there is an element of luck. It is important to look at all the factors above and realize that many stars have to align to produce a ShareLunker …or two.”

The person who catches the season’s largest entry will be named Angler of the Year. If the Angler of the Year is a Texas resident, that person also receives a lifetime fishing license. The current big bass leader is Randall Claybourne of Tulsa, Oklahoma, with a 13.86-pound fish from Lake Fork caught January 12. Big-bass catches normally peak in March during the spawning season.