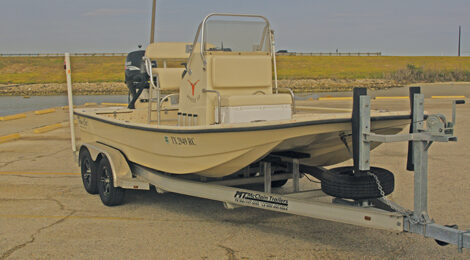 October 29, 2003 marked the 20th anniversary of my marriage to my wife Ann.  Over the years on special days I had given her those “girlie things” like jewelry, clothes, furs and such.  One Christmas, I gave her a new .25.06 Remington 700 BDL with a Leopold 3×9 scope plus some boxes of ammunition.  I wrapped the ammo boxes individually to further increase the “present count.”  After opening the individually wrapped rifle, gun case, and rifle sling, she eyed the rectangular shaped boxes that must have looked like they might hold jewelry.  Well when she opened the first to see 20 rounds of bullets I got one of those “looks.”  You can use your imagination to her response when she opened the second box to find 20 more rounds.

However this year’s anniversary gift was going to be something different and hopefully totally unexpected.  After 20 years and knowing the woman I married there is history and a story.

As a country girl growing up in a ranching family in Colorado County Ann loved the outdoors.  Through me, and my encouragement, she had fallen in love with coastal fishing.  In fact she won or placed in several categories of a number of amateur women’s tournaments including the Redfish Rodeo that at the time was held in Rockport.

Ann had also become a partner with some former business associates of ours from our commercial real estate years.  As the only female partner of SpawMaxwell Ann was in charge of the HR Department of a construction services company whose staff peaked at about 150 employees.  This position not only had her interacting with her male counter-parts but also the female members of the SpawMaxwell Team.