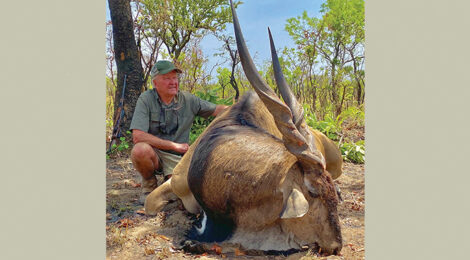 TOJ-RT / January 1, 2023 / Comments Off on Lord Derby — The Savannah’s Number One Animal / Uncategorized

The holy grail of African antelope — a 1,600 pound animal of majestic beauty, with bulls exhibiting massive spiraled horns of 45 inches or more.

In the northern Savannah region of Cameroon resides the largest member of the antelope family, the Lord Derby eland.  Considered the holy grail of African antelope, it’s an animal of majestic beauty, with bulls exhibiting exceptionally long legs, an ostentatious lacquer-black dewlap, and massive spiraled horns often extending skyward 45 inches or more in length.  It attracts the most discretionary sportsmen from around the globe to the extremely hot, dusty humid, savannah to pursue these 1,600 pound animals, and it was the reason my wife Jan and I crossed the big pond in March of 2022.

The trip to the hunting concession was as much a challenge as the hunt itself, entailing three days with a one night layover in the coastal city of Douala, a short flight to Garoua the following day, and a five and a half hour drive in a cramped, non-air-conditioned Toyota pickup on a paved road with more craters than on the moon surface.

The ubiquitous potholes reduced travel time substantially, as our driver, attempting to avoid the major depressions, was spending most of his time in the opposing lane while avoiding oncoming traffic and the hundreds of villagers walking along the roadside.

Five hours later we arrived at Faro Safaris on the Faro River and shortly after getting situated in our thatched roof, circular-shaped boukarou, I was at the shooting range.  I leased a CZ .375 from the outfit, but when informed that a new scope was placed on the gun the night before our arrival, I grew concerned.

My first shot was seven inches low, but with a few shots after tightening the bolts at the base of the stock, we were in business.