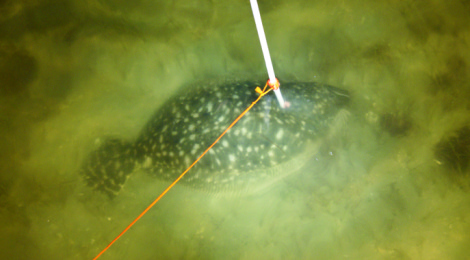 Night Hunters of the Flats

TOJ-SG / October 1, 2014 / Comments Off on Night Hunters of the Flats / Feature Articles

Night Hunters of the Flats

Outdoorsmen and women are drawn to shallow estuarine flats for a hunt to remember with bow, arrow, and reel.
Story and Photography by Nate Skinner

“My bow had salt on it.” This was the first time that concern had ever crossed my mind, as spray from the airboat’s motor rode on the southern breeze. Silver shapes fled in every direction and the bay truly was alive at night amongst the shallow flats of Pringle Lake near Port O’Connor. Redfish, stingrays, flounder, drum, trout, sheepshead, and mullet by the thousands were revealed in the clear water by bright lights, beaming from the sides of the boat and the bow.

A long, fat silhouette froze for merely a second, just a few feet in front. Instinctively a string was drawn and an arrow released, as orange string peeled from the bow’s reel by a twenty inch drum that had no clue what had just hit it. Struggling, the fish was no match for the arrow and mechanical broad head, as twelve year old, Blake Carter, quickly brought it to the deck. “Nice shot,” was all I could mutter, amazed at how rapidly the scene had unfolded.

← Fall Preparation for a New Deer Season
Fall on the Rocks →