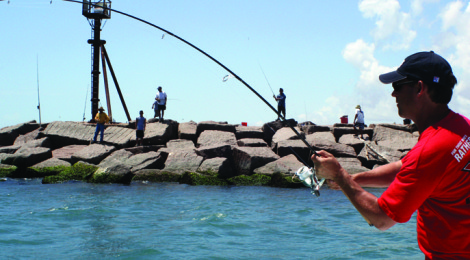 Fall on the Rocks

Fall on the Rocks
An angler never knows what will be caught while rocking the South Texas rocks in October.

When asked about their favorite time to fish their local lake or bay, anglers almost invariably say “October.” Lower Laguna Madre area fishermen are no different — October is certainly one of the best months to be fishing on the “Mother Bay.” In short, October offers an exquisite blend of aggressive fish, a wide variety of available species, and the ability to catch fish using a variety of tackle and techniques.
The weeks leading up to Halloween are also known for seeing virtually every bit of the bay produce fish. But, while just about every square inch of the Lower Laguna Madre will be probed with topwater plugs and soft-plastic jigs during October, the major arteries of the bay system — passes where the bay meets the open Gulf of Mexico — are often underutilized by fishermen in October.
There are two passes allowing water exchange between the Lower Laguna Madre and the Gulf of Mexico. The southernmost end of the bay is connected to the Gulf of Mexico via the Brazos Santiago Pass — a natural Gulf pass. About 30 miles to the north, the East (Mansfield) Cut allows tidal flow between the Lower Laguna and the Gulf. This manmade pass separates South Padre Island from Padre Island. Each of these Gulf passes is lined with jetty rocks. During October, the rock groins bordering theses passes offer some of the best saltwater fishing in Texas.