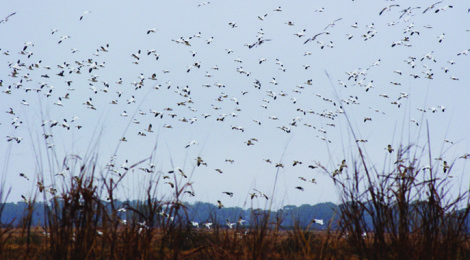 Some proven tactics that have evolved over the years to put wary geese in your straps.

Our goose hunting spread looked ready to go as we settled in under white parkas to wait for shooting time. We were on a dry rice field not far from where the Igloo plant was soon to be built in Katy off Interstate 10. All was well, until we felt a north breeze. I knew the front was on the way in, and that was a good thing.  It would put the snows and specks on the deck for an easy hunt. But after about 30 minutes, just about legal shooting time, the wind was honking out of the north and we were running around like rats on fire trying to catch our spread – it was literally flying away.

That was back in the day when pages of newspapers were used as goose decoys. I believe that jag was at its peak in the early 70’s. It was a good ploy, unless the wind kicked up.