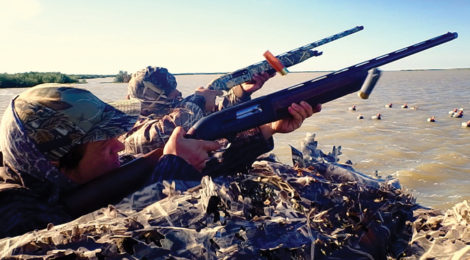 A duck hunt and fishing adventure is an unforgettable experience for sportsmen and women to share.
Story and Photography by Nate Skinner

The morning couldn’t have begun any better. An hour before sunrise I loaded my gear into Captain Ruben Garza’s duck boat with a thermos full of coffee in hand. Along with our shotguns, decoys and plenty of ammo, we also carried several homemade breakfast tacos prepared by Garza’s wife, Sandra. Sandra is not only one hell of a cook but is also the general manager at Getaway Adventures Lodge in Port Mansfield. She had individually wrapped the tacos in foil and packed them inside an insulated lunch box to maintain their heat and freshness. The tortilla wrapped treats would make a great mid-hunt snack later in the morning.
Garza’s duck boat was rigged right for the sport. A tan colored skiff, complete with a custom camouflaged paint job and built in blind. It was powered by a jet drive outboard, could run super shallow, and was perfect for our small group of three.
Thomas Sutton, son of Getaway’s owner Mike Sutton was the third in our group. Garza’s black lab was a willing companion excited to retrieve all of the ducks our trio would drop. Within 20 minutes of leaving the dock we made a short run to the south, were set up with a decoy spread and a blind on a shallow flat without ever leaving the boat.
Ducks Unlimited biologists explain the data produced by the U.S. Fish and Wildlife Service that states approximately 80 percent of the North American population of redhead ducks winter on the Laguna Madre. I wouldn’t fully grasp this reality until later in the day during an afternoon spent fishing, however at first legal shooting light it felt like I was experiencing this fact in full force.