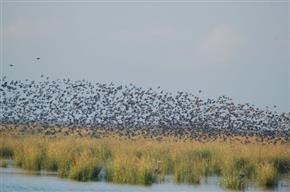 An alarming national trend of increased loss of coastal wetlands was announced yesterday in a report by the U.S. Fish and Wildlife Service and National Oceanic and Atmospheric Administration.

Status and Trends of Wetlands in the Coastal Watersheds of the Conterminous United States 2004 to 2009 found that the country experiences a net loss of more than 80,000 acres of coastal wetlands each year, up from 60,000 acres lost per year during the previous study.

“This study accentuates the necessity for funding wetlands conservation programs, such as the North American Wetlands Conservation Act and the conservation programs in thefarm bill,” said DU Chief Conservation Officer Paul Schmidt. “Wetlands are so valuable because they serve many important functions. They provide waterfowl and other wildlife habitat, lessen the effects of floods and hurricanes, prevent soil erosion, improve water quality and offer outdoor recreation opportunities.

”Watersheds in the Great Lakes region experienced a net gain in wetland area (approximately 13,610 acres), highlighting the importance of conservation programs on agricultural and other undeveloped lands. Wetland losses in the Gulf Coast (net loss of 257,150 acres) accounted for a noteworthy 71 percent of the total recorded. These losses continue to erode capacity for coastal Louisiana and Texas to support waterfowl in the most important wintering area on the continent.

“In coastal Louisiana, we’ve lost so much coastal marsh since the 1970s that today’s available habitat supports an estimated 3 million fewer ducks,” said Tom Moorman, DU director of the Southern Region. “We continue to look for ways to increase the rate of coastal wetland restoration with our partners, for example via funding from the National Fish and Wildlife Foundation’s Gulf Environmental Benefit Fund and NAWCA. DU is also involved in an innovative partnership with the rice industry to enhance working wetlands on the coastal prairies. We have to stabilize and ultimately reverse the rate of loss of these critical wetlands.

”The report also noted the loss of freshwater forested wetlands (405,700 acres) due to urban and rural development and some forestry practices.

“Forested wetlands are a particularly important class of wetlands because they comprise half of the remaining freshwater wetlands in the lower 48 states,” said Scott Yaich, DU director of conservation planning and policy. “Wetland loss has accelerated dramatically since Clean Water Act protections to wetlands were withdrawn in 2001 and 2006. This report shows that forested wetlands account for the most freshwater wetland losses, and that’s bad news for black ducks, mallards and wood ducks.

”The full report, and past reports, can be found at: http://www.fws.gov/wetlands/Status-and-Trends/index.html