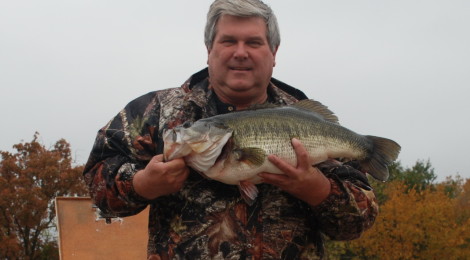 Proctor caught the 13.29-pound bass from 18 feet of water on four-pound line while fishing for crappie under the Texas 154 bridge. He was using a Panfish Assassin lure.

The fish was held for pickup at The Minnow Bucket, an official Toyota ShareLunker Weigh and Holding Station. The fish was 25 inches long and 21 inches in girth.

The fish continues Lake Fork’s remarkable record of having produced at least one ShareLunker in every season the program has existed, beginning in 1986.

Anglers entering fish into the Toyota ShareLunker program receive a free replica of their fish, a certificate and ShareLunker clothing and are recognized at a banquet at the Texas Freshwater Fisheries Center in Athens. The person who catches the season’s largest entry will be named Angler of the Year. If the Angler of the Year is a Texas resident, that person also receives a lifetime fishing license.

Official ShareLunker weigh and holding stations have been established at a number of reservoirs; a list is athttp://www.tpwd.state.tx.us/spdest/visitorcenters/tffc/sharelunker/holding/.

For complete information and rules of the ShareLunker program, tips on caring for big bass, a list of official Toyota ShareLunker weigh and holding stations and a recap of last year’s season, see www.tpwd.state.tx.us/sharelunker/. The site also includes a searchable database of all fish entered into the program along with pictures where available.

Information on current catches, including short videos of interviews with anglers when available, will be posted onwww.facebook.com/sharelunkerprogram. “Like” this page and you can receive notification and photos of catches as soon as they become available.

ShareLunker entries are used in a selective breeding program at the Texas Freshwater Fisheries Center (TFFC) in Athens. Some of the offspring from these fish are stocked back into the water body from which they were caught. Other ShareLunker offspring are stocked in public waters around the state in an attempt to increase the overall size and growth rate of largemouth bass in Texas.

The Toyota ShareLunker Program is made possible by a grant to the Texas Parks & Wildlife Foundation from Gulf States Toyota. Toyota is a long-time supporter of the Foundation and Texas Parks and Wildlife Department, providing major funding for a wide variety of education, fish, parks and wildlife projects.

How to handle and care for big fish: http://www.tpwd.state.tx.us/spdest/visitorcenters/tffc/sharelunker/handle/