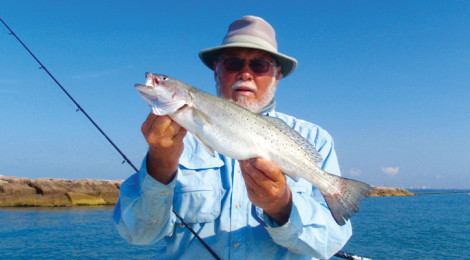 Anglers continue to battle the influences of freshwater run-off by targeting waters inside and out.

For the second year in a row, summertime has presented upper coast anglers with some giant hurdles to overcome to consistently catching fish due to dirty, off-colored bay waters and tremendous freshwater runoff.  Freshwater influences that have plagued the upper reaches of the Sabine and Galveston estuaries since the beginning of spring continue to affect where concentrations of fish are located.

The prevailing pattern through late spring is no secret for those fishing Sabine Lake and the Galveston Bay Complex.  These estuaries have endured the largest affects of freshwater runoff along the upper coast, and trout and reds have been stacked up in predictable locations with the highest salinities.  It seems this has resulted in schools of fish being run over by hoards of outboard motors in confined stretches of water, leaving many wondering when the madness will end.

With miles of open water still eliminated from the game due to low salinities, productive options may seem few and far between.  Constant fishing pressure is pushing fish away from the popular fishing grounds they have been holding around and anglers need to adjust their plans accordingly.  But where lies the answer?

The Gulf of Mexico.  Salty waters from the Gulf mix with the freshwater influences of Sabine Lake and Galveston Bay making them the fish producing factories that they are and brine filled tides draw tons of fish during extreme wet years.  With the continuing affects of freshwater flowing out of these systems and the tremendous fishing pressure in specific areas that it has caused, anglers wanting to consistently stay hooked up should focus their efforts near Gulf waters.  A productive day can be made playing the tides fishing both inside and out.