The sun came out, and the Toyota ShareLunkers came in.

On the first sunny Saturday most people in Texas can remember, nearly every bass boat in Texas was on the water, and the result was three Toyota ShareLunker entries and one almost.

The almost actually was a ShareLunker last year, when it was caught by Athens resident Frank Kirk from Lake Athens. At that time—January 25—the fish weighed 13.67 pounds. When reeled in by Robert Adams of Mineral Wells on Saturday the fish weighed 12.94 pounds—just short of the magic number of 13 needed to qualify for entry. The fish was identified by a tag inserted when it was caught last year.

Toyota ShareLunker 560 came from Lake Ray Roberts and was caught by Shannon Lee Elvington of Pilot Point. Elvington, who has fished the lake all his life, was fishing with guide Dannie Golden when he hooked the 15.18-pound bass. The fish was 26.25 inches long and 21.5 inches in girth. 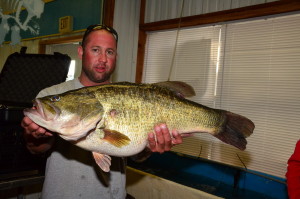 Elvington was fishing on the east side of the lake in 14 feet of 45-degree water when the fish took a jerkbait at 10:40 a.m. Elvington has submitted the fish for recognition as the new lake record. The previous biggest largemouth reported from the lake weighed 14.59 pounds and was caught in 2000.

The fish also puts Elvington in the lead for Toyota ShareLunker Angler of the Year honors as the biggest fish of the season. The Angler of the Year receives a prize package from G. Loomis and, if the angler is a Texas resident, a lifetime fishing license.

At 15.18 pounds, the fish was just over 3 ounces shy of making the list of 50 biggest largemouth bass ever caught in Texas.

Second out of the gate was Wayman Triana of Nacogdoches, who caught Toyota ShareLunker 561 from Sam Rayburn Reservoir during a Bass Champs tournament. The 13.05-pound fish was 25.5 inches long and 21 inches in girth. Triana caught it in 15 feet of water on a crankbait at 1:30 p.m. 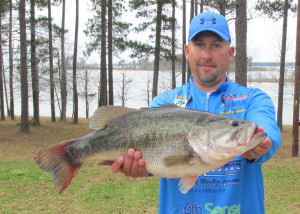 Next up was Darrell Tompkins of Huffman, also fishing on Sam Rayburn, who caught Toyota ShareLunker 562 at 6:00 p.m. Tompkins was throwing a spinnerbait in shallow water when the 14.32-pound bass took it. The fish was 26.25 inches long and 22.25 inches in girth. It was held for pickup at Jackson Hill Marina, an official Toyota ShareLunker weigh and holding station. 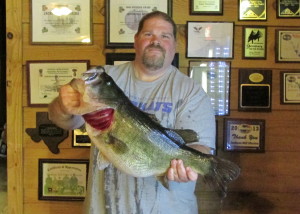 The two ShareLunkers from Sam Rayburn vaulted that lake into a tie for second place among lakes producing the most ShareLunkers. Lake Fork leads the pack with 257, while Sam Rayburn, Alan Henry, and O.H. Ivie have all produced 25.

ShareLunker catches can be reported 24 hours a day, seven days a week during the season, by calling (903) 681-0550. If poor cellphone service prevents use of the voice number, anglers can leave a phone number (including area code) at (888) 784-0600. That number is also monitored 24/7 during the season.

For complete information and rules of the ShareLunker program, tips on caring for big bass and a recap of last year’s season, see www.tpwd.texas.gov/sharelunker. The site also includes a searchable database of all fish entered into the program along with pictures where available, and a list of official Toyota ShareLunker weigh and holding stations equipped with certified scales.

Information on current catches, including short videos of interviews with anglers when available, will be posted on www.facebook.com/sharelunkerprogram. “Like” this page and you can receive notification and photos of catches as soon as they become available.

The Toyota ShareLunker Program is made possible by a grant to the Texas Parks & Wildlife Foundation from Gulf States Toyota. Toyota is a long-time supporter of the Foundation and Texas Parks and Wildlife Department, providing major funding for a wide variety of education, fish, parks and wildlife projects.