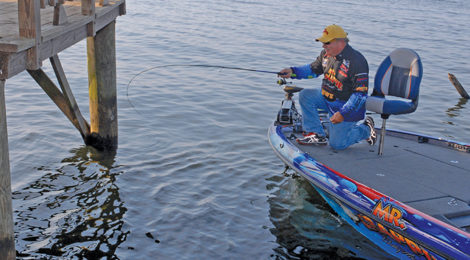 Wally Marshall of Westminster is arguably one of the most well-known crappie fishermen in North America. He goes by the nickname “Mr. Crappie,” a fitting moniker he trademarked way back in 1996. Marshall has since helped thousands of anglers learn to catch more of the tasty panfish on lakes around the country using a variety of tactics and baits.

He’s managed a comfortable living doing it, too. Marshall has won several big league crappie tournaments, but his derby winnings are chump change compared to bigger bucks he’s earned from spreading the word about an unsung sport fish and sharing closely guarded secrets to fishing success.

A former plumber, Marshall gets paid to engineer useful gear to make good crappie fishermen even better. His “Mr. Crappie” logo is stamped on dozens products marketed by some of the top outdoor retailers in the country.

Rods, line, hooks, reels, corks, rod holders, fishing seats, crankbaits, tackle boxes, jigs — if a product has anything to do with crappie fishing, Marshall probably has a finger in it.

It’s good stuff, too. Marshall designs most of his own products, and he’s got a likable personality and the golden gift of gab for promoting them.

Naturally, Marshall has learned some hard lessons during a lifetime of crappie fishing. One of the toughest dates back to 1989, when he entered a crappie tournament on Lake Wylie in the Carolinas.

It was two years after he won the first crappie tournament ever held in Texas, a Crappiethon USA event on Cedar Creek Lake. Marshall wade fished his way to the winner’s circle at Cedar Creek targeting spawning crappie around shoreline cattails using a long rod jigging technique he calls “Wally-socking.”