The angler who caught the first entry into Texas Parks and Wildlife Department’s ground-breaking big bass angler recognition program and the organization responsible for Texas having a year-around rainbow trout fishery will be inducted into the Texas Freshwater Fishing Hall of Fame in June.

Fishing guide Mark Stevenson of Alba is best known for his catch of the first entry into TPWD’s ShareLunker program in 1986. The 17.67-pound largemouth bass from Lake Fork, known as Ethel, was the state record at the time and achieved international fame during her subsequent residence at the Bass Pro Shops store in Springfield, Mo. Her presence there fueled a growing nationwide interest in bass fishing, resulting in an economic impact of billions of dollars. Two-thirds of Texas’s 1.7 million anglers are primarily bass fishers, and sales of fishing licenses and taxes on fishing-related items generate millions of dollars for conservation.

Also to be inducted is Guadalupe River Trout Unlimited (GRTU), the largest Trout Unlimited chapter in the nation with more than 5,000 members. GRTU has been the driving force behind the development of a year-round rainbow trout fishery on the Guadalupe River, listed as one of America’s top 100 trout streams in 2013. TPWD studies show this fishery has an annual economic impact of $1.9 million on the local economy, but GRTU’s contributions go much further. The organization maintains a leadership role in conservation and development of public access to the fishery.

GRTU leases access points along the river from landowners and businesses and uses fees from anglers to pay the lease fees and purchase approximately 12,000 pounds of large rainbow trout for stocking into the river each year. These fish become public property and are available for anyone to catch. GRTU also funds scientific studies of the fishery and supports a number of educational programs for young people, including Trout in the Classroom and Trout Camp. The organization also contributes to such programs as Casting for Recovery, Reel Recovery and Project Healing Waters. GRTU also supports conservation efforts nationwide, working with other Trout Unlimited chapters.

Stevenson has organized fishing trips for numerous charitable organizations, including the Make-a-Wish Foundation, Dallas CAN Academy, Project Action Benefit and Turning POINT. He has worked with the Lake Fork Sportsman’s Association to enhance the Lake Fork fishery.

Stevenson’s name will forever be associated with arguably the most famous fish ever caught, Ethel. Her presence at Bass Pro Shops brought millions of visitors to see her and sparked a rise in the company’s fortunes, which now has more than 60 stores. Gratitude for her contribution and recognition of TPWD’s efforts to develop the Texas bass fishery led Bass Pro Shops founder Johnny Morris to make a major contribution to TPWD for construction of the Richard M. Hart and Johnny Morris Conservation Center at the Texas Freshwater Fisheries Center in Athens.

Caring for Ethel during her year-long residence at TPWD’s Tyler Fish Hatchery (now closed) gave TPWD fisheries staff experience in keeping big fish alive. That knowledge has been vital to the success of the department’s ShareLunker program, which uses pure Florida largemouth bass to produce fingerlings for stocking into Texas public waters. Stevenson’s promotion of catch-and-release of big bass contributed to Lake Fork’s development into one of the top trophy bass fisheries in the world. TPWD studies show this fishery generates in excess of $25 million a year for the local economy. 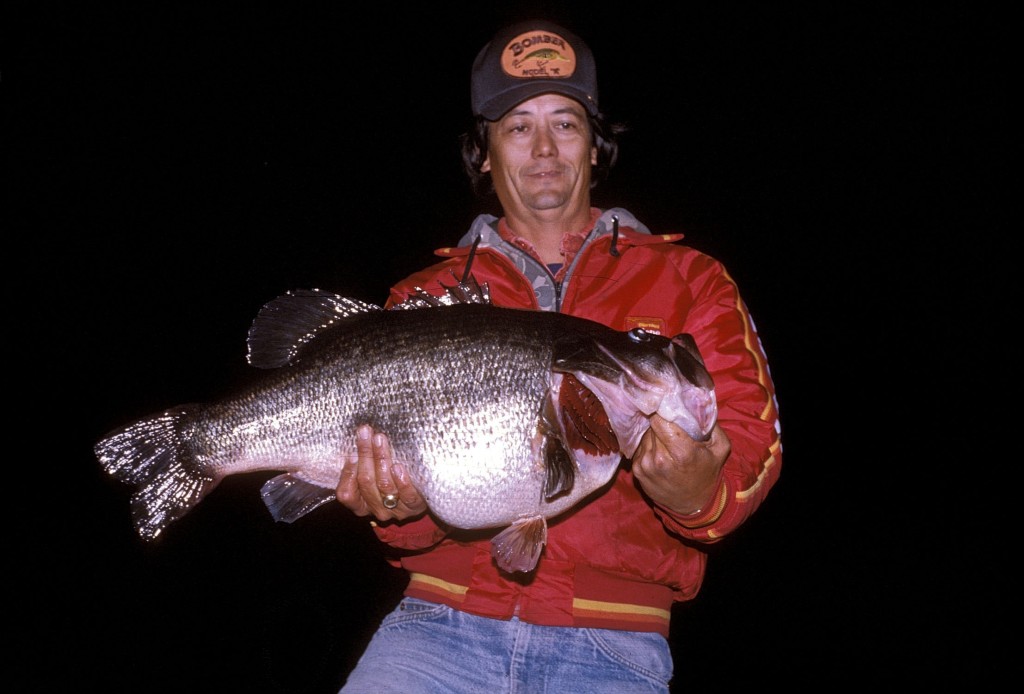 Mark Stevenson caught Ethel, the first entry into the ShareLunker program, in 1986. The program how has had more than 500 13-pound or bigger largemouth bass entered. Photo Courtesy of Mark Stevenson