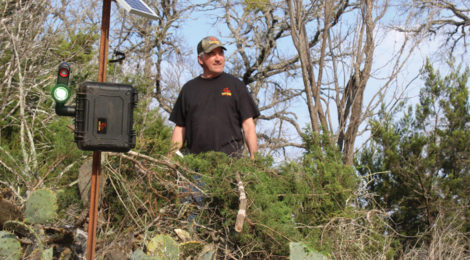 New swine hunting equipment and techniques are put to the test.
Story and Photography by Tom Claycomb, III

It’s funny how chance encounters can result in friendships plus outdoor opportunities. I first met Bill Olson, editor of Texas Outdoor Journal years ago at the Dallas Safari Club’s annual Convention and Expo. One thing led to another and we’ve become fast friends. So, when he called and asked if I wanted to go on a Texas hog hunt with him the answer of course was, Yes.
The plan was to fly into Austin and he’d pick me up after he finished a meeting that Saturday morning down on North Padre Island. I have a niece & nephew in the area so that worked great as we met for coffee and had a good time.
When Bill arrived we filled the air canister Charging System for the Benjamin Pioneer Airbow at Tom’s Dive Shop in north Austin and then took off for the Reveille Ranch near Burnet, Texas. There we met up with Murray Choate, the owner of Slow Glow L.E.D. Hunting Lights and his son Clint. They are some gung-ho hog hunters.
The plan was to grab a bite and then head to the ranch to get situated. Those plans were soon thrown out the window as Clint drew up plans for a night hog hunt as soon as we arrive. Forget the group hugs and getting comfortable that first evening.
Slow Glow has an interesting history. Murray is an inventor and to enhance his hog hunting addiction he invented a motion activated L.E.D. system. Here’s how it works.
The light is pointed toward a feeding area. When hogs come in it starts slowly illuminating over a two minute period. If it fired up right away the hogs would spook so it lights up slowly so they don’t even notice. The theory is if you have the wind in your favor and kept the light between you and the hogs you could walk right up on them.