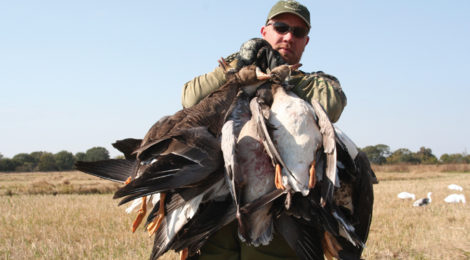 Over the years a few things have changed, but not the excitement of this hunt.
By Robert Sloan

One good example of how goose hunting in Texas has evolved over the past 40 years is in the decoys. Back in the 70’s I can remember cutting up plastic banquet table cloths to use as goose decoys. We used baby diapers, and even newspapers. The process of setting up a spread was simple – you drop a diaper on the ground, place a dirt clod on it and move on. Plus, we carried everything on our backs in big bags. All of the weight, plus a gun, ammo and a mucky field was just part of the hunt – no big deal. And many of those hunts were epic with 50 to 100 geese being brought down with lead shot.
Nowadays things have changed. We load up an ATV with hunters and all of our gear and drive right across the field where the hunt will begin. Upwards of 1,000 wind socks and full bodied decoys are set out in hopes of bringing in at least a few geese, and maybe some ducks. It’s first class hunting but one thing has happened – we have a big time lack of birds, even snows. A hunt that culminates in the downing of 15 to 25 geese is considered fantastic.
Guide Mike Lanier, who runs hunts out of the Garwood area is 58 years old and has been hunting since the 70s. He started with Marvin Tyler as a rag toter. That’s back when rags were used to fill out a spread.
“It was a lot of hard work,” says Lanier. “But we didn’t know any better. That’s just the way it was. These days people don’t want to work like they used to. That’s mainly because we have the convenience of ATV’s. But we’re still putting in a lot of work. For a typical hunt my day usually begins at 3:30 a.m. We meet the hunters shortly after 4 a.m., get breakfast and head to the field. When it’s all said and done it’s a pretty long day, but a good hunt is worth the effort. Waterfowlers love to shoot geese. There is nothing quite like calling in a group of geese or maybe a small bunch of specks. That’s what makes it all worthwhile.”