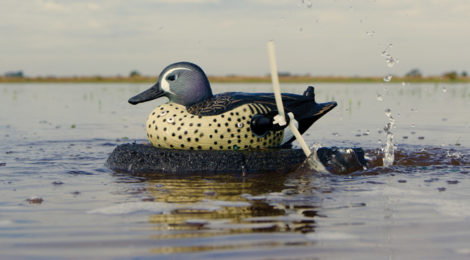 As duck seasons draw to a close using the right techniques in productive locations will yield the greatest success.
Story and Photography by Nate Skinner

Late season ducks are tricky. And sometimes they can be downright frustrating. However, there’s nothing more rewarding than snapping photos at the end of a hunt with full straps of beautiful birds bursting with color. In January the ducks are dressed in their Sunday best, showing off their breeding plumage. It’s an excellent time to harvest a trophy for the wall.
Finding a bird to mount and bringing home heavy straps of quality waterfowl is an attainable goal when the right techniques are used in productive locations. The most significant challenge to overcome is that the ducks have become educated.
For the past several months they have been pressured by thousands of hunters all the way down the Central Flyway. They’ve literally been getting shot at since hunting seasons began earlier in the fall near their nesting grounds within the Prairie Pothole Region of Canada and the northern reaches of the United States. Throughout their migration the ducks have seen their fair share of decoy spreads, blinds, and camouflage. During the first month of the year the eyes of waterfowl bring on a whole new meaning to the word weary.