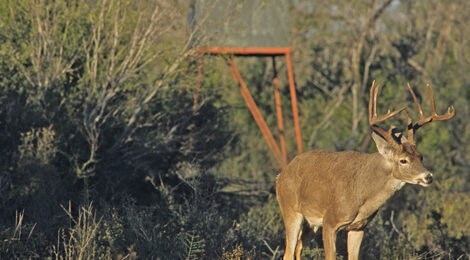 Important for a variety of reasons, but most importantly deer rely on their olfactory system to survive.

A buck fawn follows its dam on a well-used, blackbrush-laden trail deep in the heart of the Golden Triangle.  Each time the doe pauses to scent the air for danger, the fawn runs up and rams its petite nose into its mother’s udder for some nutritious milk, but before its thirst is satiated, the doe continues forward, oblivious to the fawn.

Moments later, they arrive at the edge of a plowed, yet lumpy field littered with oats.  Pausing momentarily, the doe remains motionless with its head erect and ears tilted forward, scanning for danger.  Abruptly, the doe’s desire to consume some of the palatable grain overwhelms any sense of danger, and she enters the wide open field and begins to engulf as much food as swiftly as possible, while her five-month-old fawn playfully jumps over clods of red dirt in an area void of all the irritable insects that occupy the sea of brush.

Suddenly a loud clap of thunder resonates across the landscape and the startled fawn watches its mother as she erupts into a mad, clumsy dash across the field only to collapse a few yards shy of the brush line.  The inquisitive fawn remains in the field until a hunter approaches its biological lifeline lying motionless on the ground.  The young buck hesitates initially, but once the man approaches a little closer, it dashes back into the security of the thorn scrub, alone for the first time in its young life.