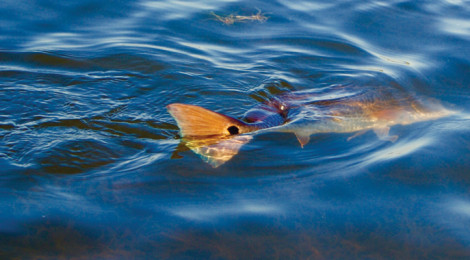 Redfish are on the move along the upper coast and anglers can catch them at a variety of locations.
Story ad Photography by Nate Skinner

The reds were stacked up right along the shoreline and had been chasing shrimp and mullet all morning long. With the boat positioned about 20 yards from the bank, the bronze torpedoes were just an easy cast away. Paddle-tail soft plastics and topwater plugs ruled, as the aggressive fish were not picky about what became their next meal along the Louisiana shoreline in Sabine Lake.
As the morning sun rose overhead, the sound of terns squawking in the distance began to resonate on the light southeastern breeze. Peering through a pair of binoculars, Captain Randy Foreman scanned the open water where the activity was taking place.
“It’s time to move,” he said, as he cranked up the motor to make a run towards the working birds. “There’s a big school over there.”
With that we were off, leaving the 20 to 24 inch redfish still biting on the shoreline. Approaching the flock of birds it was clear that the action was about to get even hotter. The surface of the water boiled with a copper tinge as a fury of reds chased shrimp and baitfish under the diving terns.
Foreman idled within casting range and we both launched baits into the feeding frenzy rendering an instant double hook up. The hook set indicated these fish were of a different caliber. Drags screamed for the next half hour as we were able to follow the school along the south end of the lake, catching numerous upper-slot and oversized redfish. And to think, we left feeding redfish up shallow to find more hungry reds out deep. August’s redfish rodeo has begun.
Texas red drum have come a long way since the late 1970’s and early 80’s when they almost disappeared from our bays. Management measures adopted by the Texas Parks and Wildlife Department (TPWD) combined with conservation efforts by the Gulf Coast Conservation Association (GCCA), now known as the Coastal Conservation Association (CCA), helped the Texas red drum fishery recover. These management and conservation efforts included banning the commercial netting of redfish, establishing size and bag limits, and the designation of the red drum as a game fish. TPWD Coastal Fisheries department also began a restocking program for redfish with the first fingerlings stocked in 1983. Now 30 million are stocked annually in our bays.