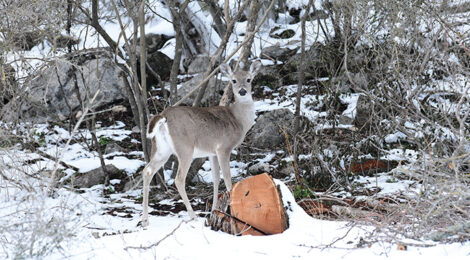 TOJ-RT / July 1, 2021 / Comments Off on Compensatory Mortality in Ungulates / Uncategorized

Native and exotic animals succumb to a variety of factors like anthrax, CWD and even extreme weather events.

On the 14th of February, nickel-sized snowflakes began to inundate Uvalde County and the Hill Country.  The following morning Uvalde was blanketed with a half foot of snow.

A rare event of this nature in South Texas is usually celebrated, but the bone-chilling air accompanying the snowstorm created much angst amongst the inhabitants of this quaint little south Texas town.  For me, it represented an opportunity to film white-tailed deer in an environment most have never seen.

Throughout the morning, I negotiated my way over and sometimes under snow-covered brush, capturing unique images of white-tailed deer in fresh white powder.  Upon my return home, I as did many Texans, experienced what wildlife had to endure when a major power surge occurred, persisting until just after midnight on the 17th,.  We were the lucky ones, as people across much of Texas remained without power and water for days. White-tailed deer handled the snow and subfreezing temperatures well, but that was not the case for two of the most abundant exotics inhabiting the Hill Country, axis deer and blackbuck antelope, as reports of mortality began to surface north of Uvalde near Utopia.  Then in the predawn hours of February 18 an ice storm occurred — turning to snow and inundating the landscape once again.