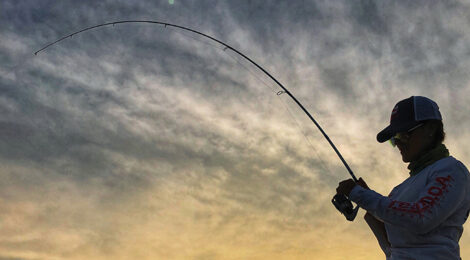 Today there are more women than ever plying Texas coastal waters with rod in hand.

Texas has hundreds of miles of coastline bordering the Gulf of Mexico. Dozens of bays and countless back lakes are scattered along that length. These salty waters have drawn recreational anglers for generations. However, in recent years the demographics among Texas saltwater anglers has changed drastically as the population of females fishing along the coast has been growing by leaps and bounds.

The surge in women anglers along the coast has been dramatic in the past few years and has been created by a diversity of fishers from all different walks of life. Women from rural areas as well as those living in Texas’ largest cities have taken up saltwater fishing.

Some started fishing early in life and continued into adulthood – or picked it up again after a pause at some phase in their lives. Others started later in life for reasons initiated from relationships to those that continued the pursuit of their love of outdoors. Regardless of when or how they began, there are more women than ever plying the waters along the Texas coast with rod in hand.

In many ways, Josette Guerra is typical of the vast majority of female inshore anglers in Texas. She is not a professional or a social media ‘influencer.’ Nor is she a ‘specialist’. However, she is very passionate about the sport and well-skilled. She is a full-time professional and mother who fishes as often as possible despite juggling a busy schedule.

“I actually started fishing with an ex-boyfriend,” said Guerra, who despite growing up in the Rio Grande Valley near the fabled Lower Laguna Madre, was not introduced to fishing until adulthood. “We bought a boat and fished all the time. I loved it right from the start. Although we eventually split up, I was crazy about fishing and kept going as much as possible with other friends who also like to fish.

← Compensatory Mortality in Ungulates
About the July 2021 Cover →