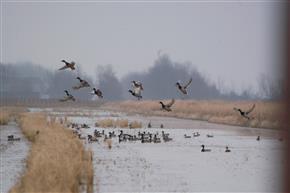 Jan. 29, 2014 – World Wetlands Day, a day to celebrate and share the importance of wetlands world-wide, has chosen a theme close to the hearts of waterfowl hunters and rice growers. Ducks Unlimited and USA Rice Federation remind us that “Wetlands and agriculture” are indeed natural partners.

“Given the intimate link between agriculture and wetlands, World Wetlands Day’s theme placing a focus on the need for wetland, water and agricultural sectors to work together for the best shared outcomes is a great idea,” said Jeff Durand a Louisiana rice farmer and Co-chairman of USA Rice’s Stewardship Partnership Committee. “Nowhere is that link more obvious than in the managed wetlands of rice agriculture.”

For many, wetlands have been seen as a barrier to agriculture, and in some cases, they do continue to be drained to make additional farming land available. In areas like the prairie pothole region, where most of the continent’s waterfowl are produced, wetland drainage continues to be a significant challenge. However, as the essential roles of wetlands in water filtration, groundwater recharge and flood abatement have become clearer, agricultural practices which support healthy wetlands are being adopted more widely, and in the case of rice production, wetland habitat is often created.

Extensive research measuring the waterfowl food resources in rice fields in each of these regions has been done for many years. As cultivation practices and rice varieties change along with climate change, the resources provided can increase or decrease.

“According to a soon-to-be-released study, 42 percent and 44 percent of the food resources available to wintering dabbling ducks along the Gulf Coast and Central Valley, respectively, comes from winter flooded rice fields. The resource values for geese are higher because of dry land feeding. Obviously, winter flooded rice fields are continentally significant for waterfowl,” Manley said.

Because of that significance, the two groups formed the USA Rice-DU Stewardship Partnership in 2013 to advocate for sound agriculture- and conservation-related policies and to promote the important ecosystem benefits of rice agriculture.

WWD marks the signing of the Convention on Wetlands on 2 February 1971, in Ramsar, Iran. Each year since 1997, government agencies, non-governmental organizations, and groups of citizens at all levels of the community have taken advantage of the opportunity to raise public awareness of wetland values and benefits in general and the Ramsar Convention in particular.