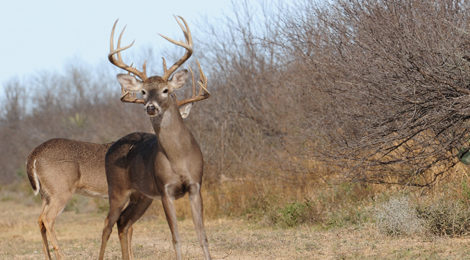 TOJ-RT / October 3, 2019 / Comments Off on Dealing With Deer Diseases / Uncategorized

As a blanket of fresh snow appears in the northern reaches of North America, South Texans continue to enjoy comfortable temperatures while bagging some of those abundant, yet hard to hit doves.  Scatter gunning dove is enjoyable, but to the devout deer hunter, it’s simply a means of coping with downtime before deer season begins in November.

Make no mistake about it the preeminent thing on the minds of deer hunters in October is just how well those new antlers fared this past spring, which is actually based on rainfall during the antler-growing season.

Well, the good news is, rainfall has been adequate throughout much of south and central Texas this past spring, and mature bucks should be supporting substantial headgear this coming season, particularly in South Texas.  However, in a few southwest Texas counties, mortality due to anthrax has occurred since June, and the number of wild hoofstock lost on some ranches has been reaching all-time highs.

On August 1 I had the pleasure of visiting with epidemiologist Dr. Jason Blackburn from the University of Florida and obtained some pertinent information about anthrax, which is endemic to several southwest Texas counties.  One of Dr. Blackburn’s interests is disease ecology of Bacillus anthracis, the etiologic agent of anthrax, a common disease of livestock, wildlife, and occasionally humans.