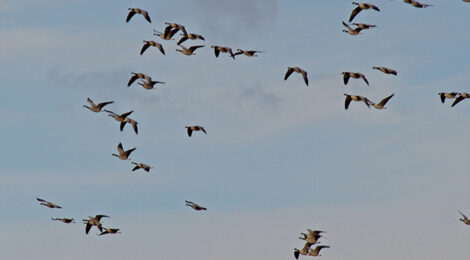 Pro’s tips to double down on great waterfowl hunts in a variety of locations around the Lone Star State.

We met at a small country store about nine miles west of Beaumont in China, Texas. It was nearly 4:30 a.m. and Bobby and Alice Vaughan were sipping coffee out of hot mugs on this not so cold morning.

“You ready to go kill some ducks and geese,” asked Alice. “This is my husband, Bobby. We’re gonna make a short drive down the road a few miles and go into the field on four wheelers.”

Sitting behind the steering wheel Bobby mentioned that it was going to be a beautiful day, with sunny skies.

“That’s not the best weather for a hunt out here, but we’re going to have a front moving through in a couple of hours,” he said. “When that north wind starts blowing it’ll put the birds on the deck. Hopefully, we’ll have a good mix of geese and ducks coming in. Let’s go see what we’ve got.”

That was over 30 years ago and I was the new outdoor writer for a Beaumont newspaper. Alice called one afternoon, introduced herself and wanted to know if I would be interested in hunting with her and her husband.

The next morning we were on our way to their flooded rice field. We headed out across the water and after a few minutes I could see the outline of a huge blind shaped like a shoe box and very well brushed.

Bobby came riding up with a load of decoys. He pointed to a bag.

“Let’s set that bag of floaters out that way. And put the pintails out front,” he said. “We’ve got about 20 minutes till shooting time.”