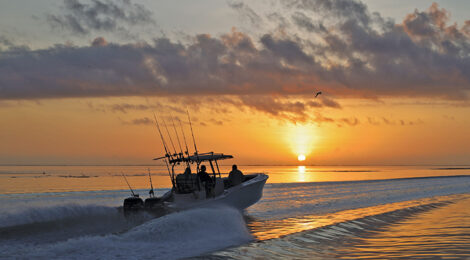 Inshore or offshore; shallow water, deep water or in the water – it will all be happening over the next few weeks.

Story and phtography by Danno Wise

Largely because football season is underway, hunting seasons have begun and school is back in session, many think of September as a fall month. But, summer officially ends on September 22. Furthermore, as all Texans know, summer weather can last until Halloween. It certainly won’t end before this month is out.

In any event, the final stanza of summer offers plenty of saltwater adventures to be had along the Texas coastal curve. In fact, it often seems as if there is a final flurry of saltwater activity during the waning weeks of summer.

One of the biggest advantages of September is the fact it is a great time to “do something different”. The water is still plenty warm. So is the air – although not quite as oppressively hot as it was early in the summer. There is still a tremendous variety of species of species available to target. Plus, water visibility is good and winds are generally light.

So, despite the fact many people will be preoccupied with other activities during September, it is perhaps the best month of the year to sample a little of everything along the Texas Coast. Inshore or offshore; shallow water, deep water or in the water – it will all be happening over the next few weeks.

Starting with the late summer offshore action… Certainly the window is closing for bluewater fishing. However, there is a mighty flurry of activity before that happens. State water snapper fishing will still be going strong – as it will throughout the fall and winter. There will still be swarms of kingfish in tight. In September, they will be joined by good numbers of ling (cobia). Depending on which section of coast you’re fishing, the ling action can be had anywhere from the jetties to the short rigs.