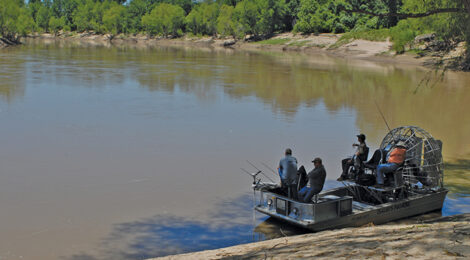 There was a time not so awfully long ago when alligator gar were perceived as the ugly ducklings of the freshwater scene.  It was a lowly trash fish with no real sporting value, no harvest limits and a history of over exploitation by commercial operations and careless anglers in some states.

So it was in Texas for a really long time, but not anymore. The folks at Texas Parks and Wildlife Department have created laws to offer some protection to the prehistoric-looking throwbacks, while at time same time providing scientists an avenue to gather research data they say is vital to assessing statewide populations over time.

On most waters, anglers are now allowed to take one alligator gar per day so long as they let TPWD know the size of the fish, where they killed it and the means of harvest. Things are even more restrictive on the Trinity River in eastern Texas. There, anglers must have a special permit to kill an alligator gar upwards of four feet long.

For several years now TPWD has been issuing 150 Alligator Gar Harvest Authorization permits annually that allow anglers to use any legal means or method to harvest one qualifying fish — during day or night — from a section of the river that some experts say is one of the last strongholds for trophy-class fish in North America. The permits are free and there is no cost to apply.

The most common methods used by permit holders are rod and reel equipped bow and arrow. Rod and reel anglers can still target trophy alligator gar year-round on the Trinity without a permit but the fish must be released.