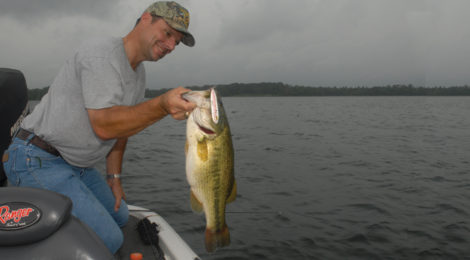 Texas’ one million-plus bass anglers will be out in force this month as bass fishing’s version of March Madness gets into full swing on lakes all across the state. I don’t know what your strategy will be over the next 30 days, but a bunch of us will be running a full court press in skinny water hoping to force a big ol’ bass into making a costly turnover that can be turned into 10 pounds instead of two points.
March is the month when the height of the spawn occurs on Texas bass lakes. It’s a bewitching time period that beckons armies of bass — small and large — towards the shallows to create another generation of bass for bass anglers to catch. At no other time of the year are there more big bass finning around in the shallows than there are during springtime.
While that’s the root of the all madness, the fuel that feeds it is the belief that there are more heavyweight bass caught in Texas during March than any other calendar month. Anyone who doubts such a claim needn’t look any farther than Toyota ShareLunker program to find plenty of proof for support.
The spawning and genetics research program run by the Texas Parks and Wildlife Department has taken in 565 bass topping 13 pounds since its inception in November 1986. March has produced roughly 42 percent (239) of those entries. The second most productive month for whopper bass is February with 23 percent (130) of the entries.