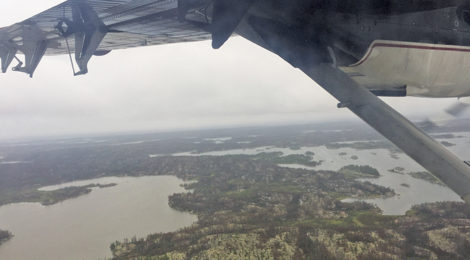 History, expansiveness and remoteness are the attraction for a pristine trophy fishery.

There are a lot of reasons Texans travel.  Most of the time the appeal is because we can relate to, or are drawn to some aspect of the destination.  It may be the people that are somewhat kindred spirits to those in the Lone Star State.  They too may have a “can-do” and pioneering character to accept a challenge in a new, wild, isolated land.

Other times it is new facets of what distant a land offers.  It may be its rugged vastness, unique wildlife or so remote few if any have ever seen.  Add in a dose of nostalgia of its history and it is no wonder so many travel to challenging locations.

The history of free trappers out west and in the northern part of North America in the early 1800s has always held a special appeal.  Surviving and making a living in a land that can rear up and hurt you or worse stimulates the adventuresome spirit.  Even with the availability of today’s modern conveniences and technology there are so many variables that should be considered, prepared for and taken into account.

At a young age I was introduced to the Rocky Mountains.  Since then as an adult I’ve hunted, fished, hiked and camped over a vast majority of the western states of the lower 48, plus several Canadian Provinces.

The stimulus for expanding my adventures further north came in the form of an invitation to travel to Canada’s Northwest Territories to fish such a pristine and remote lake that its only access is by a float plane.  The invitation from Myles Carter of Nonacho Lake to catch lake trout that regularly exceed 30 pounds and can run as large as 50-60 pounds got my attention.  When he confessed his camp was the only one operating on the 305-plus square mile glacially formed Nonacho Lake and was the only guide service within a 90 mile radius, I was in. However, the background for this story is important and actually began decades before the fishing invitation was ever offered.  My intrigue to venture to an area north of the United States, east of Alaska and the Yukon, north of Canada’s western Provinces and beyond to the Arctic Circle was easily peaked.