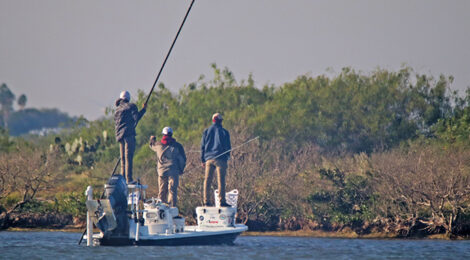 The best time to plan an angling escape to South Texas may be during the colder months.

Most everyone who enjoys coastal fishing thinks of taking a fishing vacation during summer. However, an argument can be made that the best time to plan an angling escape to South Texas is actually in the winter months.

For one thing, the Lower Coast region generally does not see temperatures drop as low as the rest of the Lone Star State. This makes fishing more comfortable for anglers and makes the region a true year around fishery with a variety of species available all 12 months.

Secondly, thanks to the mild winter temperatures, shallow water areas are still in play even during January and February. Generally, people think about deep water fishing during winter. While there is truth to the deep water theory – and the relatively few deep water areas in South Texas bays will certainly produce fish this time of year – there will be a lot of activities on shallow flats in late winter as well.

Finally, quality, quantity and diversity will all be part of the South Texas angling equation during January and February. Trout and redfish will be main focus, as always, but winter usually represents an excellent opportunity to catch trophy versions of each species or, at the very least, good numbers of very solid fish.

Flounder will once again be legal to retain following the temporary closure. Black drum and sheepshead will be very active on the flats in every bay and at the southernmost tip of Texas, snook and juvenile tarpon will be a great bonus fish for light-tackle anglers.

Starting at the top of the Lower Texas Coast region, Corpus Christi guide Capt Joey Farah of Farah’s Backwater Fishing Adventures spends time guiding in both the Upper Laguna Madre and Baffin Bay.  He says they each have unique reasons for attracting anglers during late winter.

← Cream of the Crop
Benefits of Harvest Data →