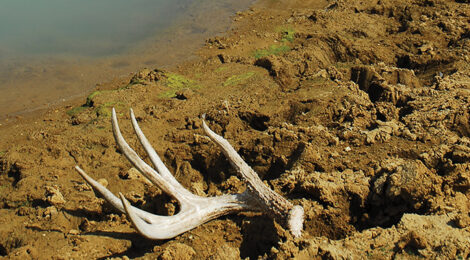 The Search for Shed Antlers

Staying active during hunting down time can result in additional information on a deer herd.

On a cool spring morning, a buck maneuvers through a whitebrush thicket towards an island of colorful, nutritionally enriched forbs important to its diet as well as antler size.

Gorging itself on the palatable herbivory, the sound of a diesel engine shatters the quiescent morning.  Abruptly, the buck dashes to the brush line, pausing momentarily to scan for danger when the noisy ranch pickup appears.

Diving into the protection of the thornscrub, the buck doesn’t run very far before coming to an abrupt halt, standing erect and cement still, facilitating its radar-like nose to check for danger.

Realizing no eminent danger, the animal begins to relax, but now without antlers, as they are lying amongst the sea of colorful flowers the animal was nibbling on earlier to recoup nutritional losses accrued over the long, cold winter.  One of Nature’s most fascinating events, antlerogenesis has begun.

The sheds remained for only a short time before white-footed deer mice, cottontail rabbits, and even deer began to gnaw on the calcified appendages.  All these animals had one thing in common — they required calcium in their diet, and that’s just what the antler represented.