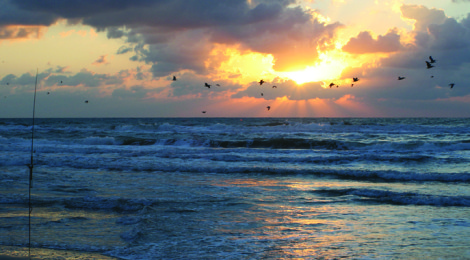 Anglers can expect good tugs while fishing during cold weather on the lower coast.

People from across the United States flock to the Rio Grande Valley during the winter months in an attempt to escape from the bitter cold temperatures that settle in across much of the country. The region, which is often referred to as the “Texas Tropics” due to its mild winter temperatures holds plenty of promise for vacationing anglers as well. The southern end of the Lower Laguna Madre, which is sandwiched between the towns of Port Isabel and South Padre Island, offer fishermen a variety of options throughout the winter months. So, when the winter chill becomes too much and cabin fever begins to set in, anglers from Texas and beyond should consider heading south for a winter fishing vacation in the Texas Tropics.

Sunny Days, Skinny Flats:
Because of its semi-tropical latitude, the Lower Laguna Madre sees plenty of warm days year around – even in the dead of winter. Given a few sunny, warm days redfish, speckled trout and black drum will get on the shallow flats to feed. Because of winter’s generally clear water, these warm days offer some of the best shallow water sight-casting opportunities of the year.
Under these conditions, fishing the flats for reds and specks isn’t a whole lot different than it is during summer or fall. In fact, fish feeding on skinny flats on warm winter days exhibit much of the same behavior as they do when feeding in the shallows at other times of the year. For instance, often time fishermen will find redfish tailing on a winter flat. Trout will often be found lurking in potholes or cruising along grass lines or depth changes. The only real difference is the fish will be hanging in shallow water over muddy bottoms instead of sand on most winter days.