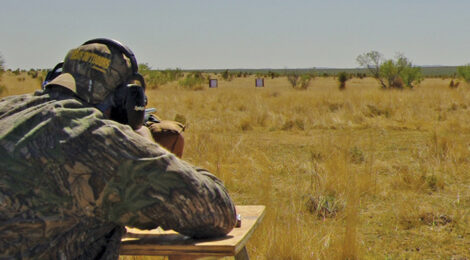 There’s a presentation philosophy that states, “Tell ‘em what you’re going to say, say it and tell ‘em what you said.  This is a simple reinforcement of the topic being presented.  That is the basic premise of this column.

In the March and June 2021 issues, Texas Outdoors Journal’s Shooting Editor, and proprietor of M-G Arms and I presented columns on improving accuracy on rifles as well as the virtue of the timeless .30-06.  This report offers more insight into the work done to my vintage Remington 700 BDL chambered in .30-06.

It was the first hunting rifle I ever bought after extensive research of rifle actions and available calibers.  Over the years and with many other firearms added to my arsenal it has remained my go-to firearm on numerous big game hunts for whitetail and mule deer, pronghorn antelope, black bear, elk and wild hogs.  It’s performance; reliability and results from those hunts further endeared this rifle to me resulting in a long-term sentimental attachment.

However, it is a Remington and needed the trigger replaced to assure an accidental discharge did not occur.  O’Day stated, “The issue with the Remington factory trigger was two-fold.  First many didn’t know what they were doing when it came time to adjust the trigger pull and second people didn’t clean the trigger.  They had been taught how to clean the barrel and stocks, but were never taught how to remove the trigger and properly clean it. “The problem was people.  Filth, because of a lack of cleaning would build up and result in the sear disengaging.  It was never a Remington problem but rather a problem created by not properly cleaning and caring for the rifle.