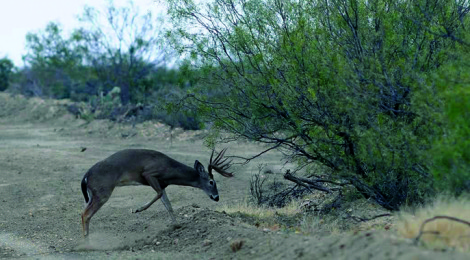 Sportsmen aware of the whitetails’ dependency on smell can use this knowledge to their advantage.

Modern day deer hunters employ technology in a variety of ways to assist them in becoming more effective. One of the major technological advances used by sportsmen is the motion detection cameras. They are not only used to locate particular deer, but as an efficient population estimation tool. They also provide evidence as to when deer are most active while recording certain behavior exhibited between their cohorts as well as other species.

But to understand deer behavior, one must concede to the fact that a deer’s keen sense of smell elicits certain responses. Equally important, however, is just how a deer’s scent is dispersed in their complicated odiferous world.

Deer rely on their olfactory system for a variety of reasons. For one, it compensates for their poor vision by facilitating the detection of predators and/or competitors sometimes long before they see them. They also employ their keen sense of smell to locate food.

More importantly is the fact that it is one of their principal means of communicating with other deer. Based on the scent detected, a deer can recognize other deer, determine its sex, hierarchal position, and even reproductive status.

← Baits for the Big Ones
Duck Hunting —Bigger & Better in Texas →