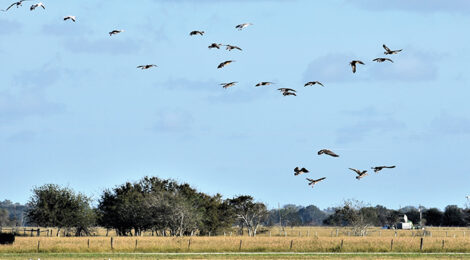 The Lone Star State has more variety of great waterfowl hunting spots than you can shake a stick at.

Waterfowl hunting is a tricky sport, especially here in Texas where we have so many great hunting areas to set up on with any given day.

One of the worst duck hunts I have ever been on was in Arkansas where the chance to hunt greenhead mallards was about as good as it gets. A buddy and I made the run up there for a two day hunt out of a club that was well known for it’s mallard hunts in flooded timber. To make a long story short we froze our butts off, cracked ice to float the decoys and shot a total of three greenheads in two days.

Conversely, one of the best mallard hunts I’ve ever had was just off the Bolivar Peninsula, south of Winnie. I got a call from outfitter Forest West one afternoon. It was about the middle of December and Forest said he had a marsh pond that was holding a good number of mallards. I thought it was a joke at first. Greenheads in Southeast Texas are just about unheard of. Forest was an expert at luring outdoor writers into some pretty crazy hunts. But, willing to take a chance, I agreed to meet him at a back country road about a mile from the Bolivar surf.

There were oil derricks all over the place. And I definitely had my doubts. But there in the middle of all that oil field trash was a pond surrounded by brush and tallow trees.

We put out about a dozen decoys and leaned up against a couple of trees and waited till shooting time. About an hour into the “mallard” hunt we had not fired a shot. I was ready to file a formal complaint to the head man in charge of the Los Patos Hunting Lodge when a pair of mallards came in low over the trees. Forest dropped the drake with one shot from his 12 guage Winchester pump shotgun. Next thing you know we had “greeners” coming in on cupped wings and we had easy shots.

← December Deer Hunter’s Objective
For The Love Of Grass →