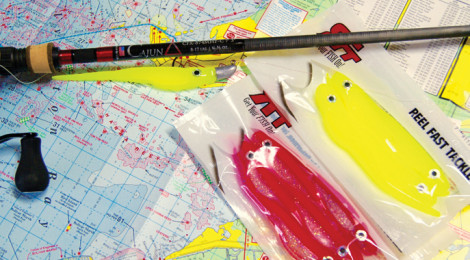 Deep structure is where trout and reds will find refuge from the summer heat and strong freshwater influences.
Story and photography by Nate Skinner

I had never fished so slowly — ever. Examining the action from my rod it might appear that I was bass fishing, dragging a Carolina-rigged worm along the bottom. The presentation was so lethargic, it was as if I was trying to hang my jig on the shell that littered the bay floor. Every now and then a slight thump and head shake would rattle the tip of my rod after my soft plastic offering bumped oyster.
The strike was quite surprising and often rendered a quick, awkward hook-set. Bites were sometimes so unexpected and subtle that my line would just barely start to drift in one direction or another as a hungry fish would slurp the bait right off the bottom. Yes, they were eating it even with a long pause between twitches when the lure was allowed to simply sit on top of the reef.
Despite the eccentricity of the moment, each bend of the rod brought a quality trout to the surface. Their backs were black like that of a bass and their fins had a yellow tint to them. Each had red sores and mud along their bellies. It was clear they were adapting to the freshwater layer taking place in the upper half of the water column, following heavy spring rains and a ton of freshwater run off.