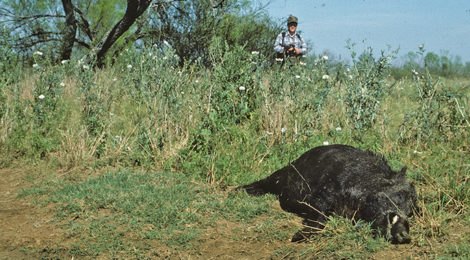 Not only a challenging animal to hunt, they represent exceptional table fare at an affordable price.

As my hunter, a strapping 12-year-old hoping to take his first hog, along with his dad followed me up a gentle slope blanketed with post oak and hickory leaves, I could hear the distinct sound of hogs feeding on the metal-hard hickory nuts buried in the ground litter.  The sound was very familiar to me, but it was the first time the pair had ever heard the loud crack echoing across the ridge, much like the sound of a .22 caliber rifle going off.

Once notified that hogs were in the vicinity, the young man broke out into a wide grin.  It was a crystal clear, cold East Texas morning, and the warm, early morning sun gilded the lifeless, sparingly-leafed trees littering the forest.

Just before reaching the pinnacle of the hillside, I informed the youngster that once we entered the saddle at the top of the hill, I expected to see what we were after—a big Piney Woods rooter.  But I also told him should we see additional pigs, he should keep shooting until I say stop.  A few minutes later, we stealthily entered the saddle and I could see mounds composed of leaves scattered across the area like a mine field.  Before I could tell my hunter that each pile had a hog underneath as they utilized the leaves for insulation, a giant sow erupted from its bed.  With leaves slung into the air in every direction, the huge sow made a mad dash for safety.