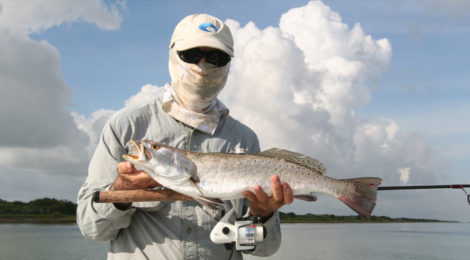 Understanding the bait transition will put more trout and reds in the cooler.
Story and Photography Robert Sloan

Capt. Ron Arlitt got his Parker center console anchored and gave us the thumbs up for fishing the surf. The water was green to the beach and things could not have looked better. Three of us baited up with live shrimp and made the cast to the first gut. We fished, caught nothing and fished some more.
“Ok,” said Arlitt. “Let’s switch over to croakers and see what happens.”
Dan Jenkins was the first to get a croaker in the water and immediately hooked up with a big surf run trout.
“That didn’t take long,” laughed Arlitt. “Some days they are on shrimp. Sometimes a mullet is best. But today it’s definitely croakers. You never know what a trout or a red is going to want on any given day. That’s why it’s important to take along a variety of live baits. I normally load up with two or three quarts of shrimp and several dozen croakers.”
Trout can be finicky feeders. Typically, during late spring, they will be on a strong live shrimp bite. That’s mainly because that is the most prevalent bait around. But as currents warm the bite will go from shrimp to croakers and mullet.
When fishing the jetties, it’s always a good idea to have a variety of baits onboard. Dodd Coffee has been fishing the Port O’Connor jetties for decades. His boat is rigged up with two live wells. One is for shrimp, and another is for croakers.
“When I fish the jetties I like to catch both trout and reds,” says Coffee. “Trout are usually more partial to eating a live shrimp. Reds tend to bite better on croakers. But you never know from one hour to another what either will want. I’ll usually start out fishing croaker on bottom during the summer months.”