Browse: Home   /   Surface Scratchin’ — For Love of the Game 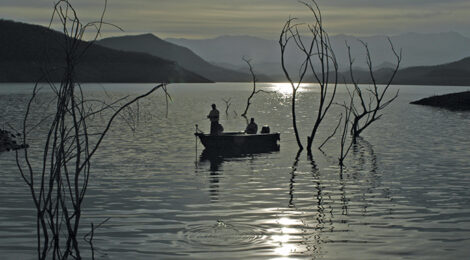 Surface Scratchin’ — For Love of the Game

Fooling bass with a variety of surface lures provides an adrenalin rush that is addictive.

Anyone who has spent much time around me knows I’m a bass junkie at heart and a topwater nut from way back. I like to catch bass any way they’ll bite but I had rather fool them with a surface lure than any other way.

The eccentric melody of a topwater plug at work definitely toys with the mind, but it is the violent explosions that sometimes happen when a big bass eats one that keeps guys like me coming back for more. It’s a squeaky-clean addiction that gripped my fishing soul in the late-1960s and never let go.

I was just a kid from Garland without a care in the world back then. I owned a cheap spincast outfit and a tiny tackle box used mostly for storing corks, split shot weights and small hooks that I tipped with earthworms, minnows and grasshoppers whenever they were in season.

I fished a lot as a child, mostly from the banks of stock tanks around Collin County. That’s where my hang-up on topwater fishing got started.

Interestingly, it didn’t begin with a cast. It began with a spent shotshell casing I tossed into an old farm pond as my dad pass shot doves coming to water along the caliche shoreline.

The ripples hadn’t even settled on the surface when a head-hunting lunker came calling. Acting on a fit of rage, the fish smashed the bobbing shotshell so hard it sent a spray of white water sailing. My dad’s treasured response was classic and straight to the point.

Roughly 40 years have gone by since that sultry summer afternoon and I still get the insatiable itch to act on what I saw and heard that day.