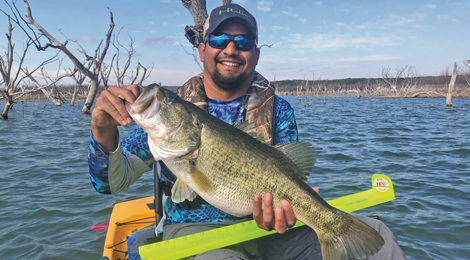 The Spring of Corona

We’re on the backside of a horrific spring that everyone had just as soon forget — a period in time when the Wuhan corona virus gripped the country and modern life went on an unprecedented pause that may or may not be over with just yet. With it came immense changes that have impacted everyone, young and old.

Some sports seasons ended prematurely; others never even got started.

And “social distancing” became a buzz phrase that we’re all sick of hearing.

While the list of negatives goes on and on, the good thing is thousands of Texas folks continued to fish right on through the chaos. Texas Governor Greg Abbott specifically listed fishing and hunting as essential outdoor activities still allowed so long as social distancing protocols were followed. As of early May, most boat ramps at freshwater lakes and rivers around Texas that were closed have reopened.

Although business slowed for many fishing guides, most lakes bustled with traffic as anglers of all ages looked to one of America’s oldest pastimes and purest forms of isolation to find respite from the pandemic and the anxiety surrounding it. Some lakes were so busy in March and April and that the typical weekday looked like a July 4th weekend.

Surprisingly, there weren’t more Toyota Legacy class ShareLunkers caught with all those hooks in water.