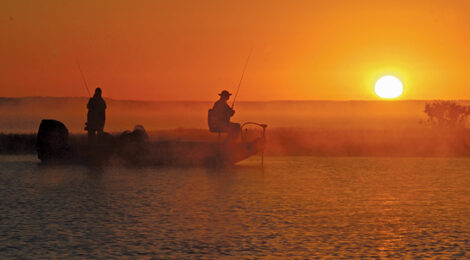 April falls during the heart of the spawn with armies of fish prowling in or close to skinny water.

It’s April in Texas. Time for all East Texas bass junkies to get their game faces on and head out to their favorite fishin’ lake.

It makes no difference if you are hoping to reel in a whopper or boat a few keepers. There may not be a month of the year other than March when the odds are going to be more in your favor. Nor is there a better place to do it.

April falls during the heart of the spawn on many lakes across eastern Texas. That means there will be armies of fish prowling around in skinny water or real close to it.

Some will be actively spawning on beds, while others will be standing guard over newly hatched fry or holding around nearby staging areas waiting for their biological tickers to tell them move closer to the bank to do their thing.

“A lot of anglers are under the impression that every bass in a lake runs to the shallows to spawn at the same time, but that is not the case at all,” explained bass pro and fishing guide Tommy Martin of Hemphill. “Bass spawn in waves, usually beginning on the north end the reservoir first. Spawning activity on many of our lakes begins in February, usually at the lake’s upper reaches, then progresses southward as the water deepens towards the dam.”

This holds especially true on large impoundments like Toledo Bend, a massive 181,000 acre reservoir located along the Texas/Louisiana border. While the majority of the spawning activity up north will likely be over by now, good numbers of aggressive fish will be prowling the shallows south in creeks and pockets south of the Pendleton Bridge.

“They’ll be in a full-blown spawn in April,” says Martin. “The shallows are the place to be. I’ll rarely fish any deeper than five feet this time of year and I’ll always try to fish close to deeper water. The main key is to slow down.”