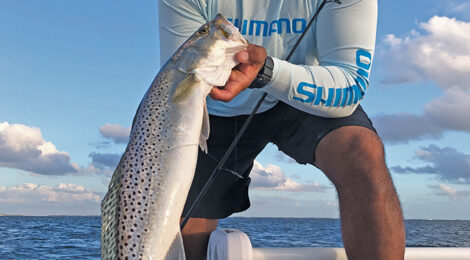 TOJ-RT / April 1, 2021 / Comments Off on Choosing the Best Option / Uncategorized

For Texas coastal fishermen, April typically signals the start of speckled trout “season.” Although big trout hunters have been active throughout the winter and early spring, the fourth month of the year is when fishermen typically start getting numbers of solid keeper trout to go along with some super-sized specks.

True, this spring may feel a little different as a result of February’s freeze event. Nonetheless, the speckled trout will likely still be tops on anglers’ target lists this month. As is often the case this time of year, there will be plenty of spots to find and ways to catch spring specks.

April is time of transition as water and air temperatures continue to rise throughout the month. The warming temperatures encourage more activity and also see fish begin changing their locales. As a result, anglers can expect to find specks in a variety of terrain this month. Many fish will begin to move into the shallows. However, there will still be numbers of specks in channels and along channel edges, as well as around reefs, bridges, production platforms and other mid-bay structures. Back lakes and marsh areas will also be holding fish.

By this time of the spring season, bait will also be more prevalent. The year’s hatchlings of shrimp, crab and various baitfish will be filling Texas bays. As a result, fish will have a variety of prey items to choose from. Quite often, they are hyper-focused on whatever prey item is prevalent in that portion of that bay on that day and won’t hit anything else. So, anglers need to be aware of what bait is on the menu for a given day and adapt their offerings – both natural and artificial baits – to match.