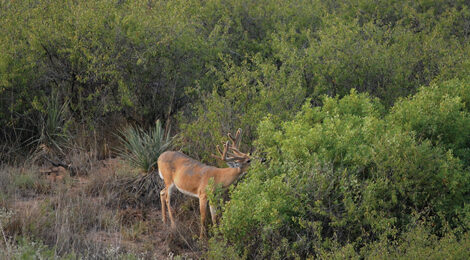 Final preparations in order to savor the holistic experience emanating from the hunt.

The jury remains out, but the volume of precipitation in May and the acceleration of vegetative regeneration in its wake unquestionably impacted antler development, which could breach the exceptional category this hunting season.  Rainfall returned during the first three weeks of July, and even when it wasn’t raining, persistent cloud cover reduced evaporation rates, allowing water to remain in the soil, benefitting new plant growth.

With substantial rainfall occurring in the first week of August, sportsmen should realize a great year for antlers.  However, in order to capitalize on the situation, some scouting could prove beneficial.

The problem with preseason scouting is the time involved because most hunters have busy lifestyles, spending most of their time making a living, which relinquishes little opportunity to scout.  But South Texas hunters enjoy one major advantage when it comes to scouting, and that is a long season that incorporates the rut, which in South Texas peaks in mid-December. As a result, hunters entertain several weeks to scout while hunting before the highly anticipated surge in rutting activity occurs.  And since mature buck activity in November is minimal, time can be spent acquiring knowledge about the area being hunted, if not locate a glimpse of a mature buck or two inhabiting it.

← Fishing From Above
On-Top Angling Options →