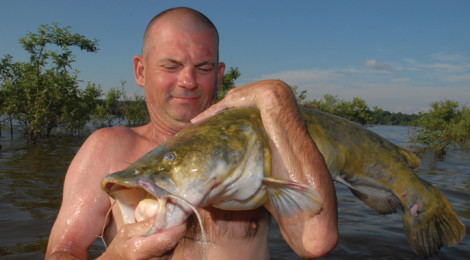 It’s game time on a lazy Monday afternoon and Ronald Murdock and Ricky Don Griffin are in their happy place doing what they love – wading through murky water and poking around in rocky crevices, concrete washouts, undercut banks and other hidey-holes in hopes that a big catfish will take the bait.
No hooks, lines or sinkers in play at this party. Just human hands, arms, legs and feet of varied sizes.
The two men aren’t alone in the hunt for a big bite on Toledo Bend Reservoir. Murdock’s two young sons, Camo, 10, and Call, 12, are out there bobbing around in the shallows along with their 8-year-old cousin, Trapper, and Griffin’s son, Cutter, 13. Murdock’s wife, Paige, also is along for the trip. But like me, she has no interest in sticking her hands and feet into places where the sun doesn’t shine.
“It kind of funny, says Griffin. “Back when we were kids our dad’s always warned us about sticking our hands in the mouth of a big catfish because they can rip the hide ride off. Now that we’re grown, we go out looking for big catfish just so we can do what our dad’s told us not to do. And we’re teaching our kids to do it, too.”
The youngsters are fast learners, but that won’t come as a surprise to anyone familiar with their family tree. The woods and water are in their blood.
I sat next to Camo on the way to the lake that day and he passed the time watching hog hunting videos on his cell phone and talking about getting another bulldog pup to train as a catch dog. “I’ve been hog hunting for the last three days — we caught a good ‘un the other day,” he said. “I’m ready to do something different.”
Both men always see to it that their sons are never at a loss for fun things to do.
“Our kids are different than a lot of kids,” Murdock said. “They’re country boys – it’s what they do.”
Murdock and Griffin – both from a rural East Texas community of Martinsville – are big time adrenaline junkies who get a serious buzz from all things wild. When it comes to catching catfish, “noodling” is about as wild as it gets.