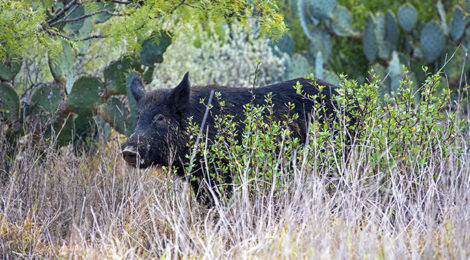 TOJ-RT / May 2, 2020 / Comments Off on HARD-HITTING HANDGUNS FOR HOGS / Uncategorized

My first introduction to wild hogs occurred as a young boy while watching two classic movies.  Scenes from Walt Disney’s “Old Yeller” and the melodrama “Home From the Hills” provided impressions of free-ranging wild hogs.

Most remember, “Old Yeller” was set in post-Civil War Texas with the Coates family scratching out a living on what the land would grow or yield.  When the father (Fess Parker) left to push some cattle to market the manly-responsibilities fell on his oldest son Travis (Tommy Kirk).  This included notching the ears of free-ranging piglets and shoats as a way of marking them as the Coates’ own.

A few years later I watched “Home From the Hill” on the local “Late Movie” with my Dad.  It was set in East Texas back in the 1950s.  At the time of my initial viewing I was too young to understand the adult-story line of the melodrama however, I was certainly captivated with the thrill of growing up doing manly-outdoor things in Texas with my father.

In the movie Robert Mitchum played the wealthy and influential Capt. Wade Hunicutt.  As his youngest son Theron (George Hamilton) approached adulthood “The Captain” decided it was time for him to be removed from the sheltering-ways of his mother and become a man. Being older when I saw this movie the scene of Theron venturing toward the edge of a foreboding swamp where a big boar was rooting up the countryside made a huge impression on me as an aspiring young hunter.  When the face-to-face confrontation occurred and that big-mean-tusker charged Theron, he followed his fathers instructions, stood his ground and put the boar down with a shot from his lever-action rifle.

← Fishing Central Texas Rivers & Streams
About The May 2020 Cover →