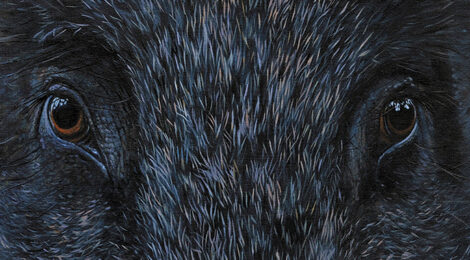 Hunting in the dark is far removed from using torches or “enhanced lights” of old.
Story and photography by Bill L. Olson

In the beginning there was darkness except for those nights when the moon on a clear night faintly illuminated surroundings.  Once hunters discovered fire, torches were used to provide some light to help offset man’s poor vision compared to the superior sight of some game being pursued.

Modern technology brought multi-cell flashlights used by law enforcement.  Those lights that could tighten the white beam to a concentrated spot were much preferred.  However the bright white light spooked as much game as it help observe.  We learned to widen the spot, hold the light high so just the edge of the surrounding halo picked up the animal’s eyes being spotted.

From a tight-beam flashlight the coming of the new age was the battery powered spotlight.  Q-Beam was a popular brand with tens of thousands of candlepower being the attraction for night hunters.  The brighter the better, but there was still the issue of the white beam spooking game like wild hogs, raccoons or predators being pursued.

Necessity is the mother of invention and a variety of homemade red-colored lenses or coverings were made and used to not-so-disturb the critters being observed.  The next best thing to sliced-bread were the snap-on colored lenses that provide the desired colored light.  How many plugged a spotlight into their truck’s cigarette lighter, snapped on a red lens and just knew this had to be the best ever?