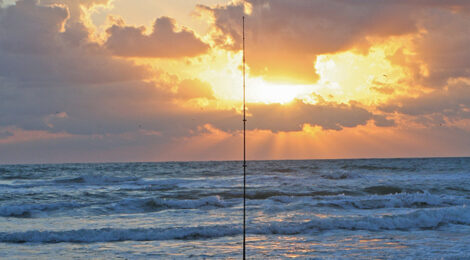 A mix of boredom and frantic action with hook ups that are usually controlled chaos resulting in a uniquely memorable angling experience.

September, as the calendar and nearest thermostat will verify, is still summer. The waters along the Texas Coast are still plenty warm. Weekend crowds are still plentiful on beaches in the Lone Star State. Also present in abundance during September are sharks swimming in surf and along the beachfront. While sharks strike fear in some, they fascinate others. For an ever-growing crowd of anglers, they have an irresistible allure.

Shark fishing in the surf is equal opportunity big game fishing – it is accessible to everyone. Serious shark hunters employ 4-wheel drive vehicles fitted with specialized towers. However, weekend anglers can catch smaller sharks without a minimal investment in tackle and rigging, so long as they have a decent amount of how-to knowledge and a good supply of patience.

Surf fishing for sharks is hardly a new pursuit.  The late Billy Sandifer, legendary Coastal Bend shark fishing guide and conservationist was on the cutting edge of the sport in the 1970s and 80s. Over the last decade, the sport has grown not just in the area of its genesis – the Padre Island National Seashore – but all along the Texas Coast.

Laguna Vista resident Mark Cano, one of the founding members of the surf-fishing group Fishing Locos, is typical of many modern Texas shark anglers. A lifelong fishermen, once bitten by the shark fishing bug Cano transitioned almost exclusively to fishing for sharks – big sharks – from the beachfront. While he has spent some time shark fishing in the Coastal Bend, the vast majority of his trips take place on the uninhabited stretch of South Padre Island beach between the city limits of South Padre and the Port Mansfield jetties.