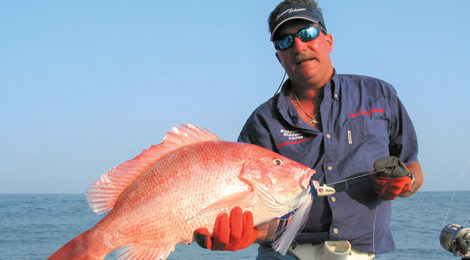 Recreational offshore anglers gear up to fish both Federal and State waters.

It’s hard to believe that we’re finally making some headway on the recreational side of red snapper fishing in federal waters. As it is, we are set up to have a projected 97 days fishing season in federal waters beginning June 1 out past nine nautical miles. Unfortunately, we are still stuck with a ridiculous two fish per person per day limit in federal waters, with a 16 inch minimum size limit. Thank goodness we will retain a 15-inch minimum in state waters, where common sense still prevails. Keep in mind that the season length in federal waters is based on historical landing data, last year’s fishing effort data and the increase in the state’s allocation from the 2018 stock assessment.

Under an agreement between Texas Parks and Wildlife Department and the National Marine Fisheries Service that was signed in April 2018, TPWD can establish the opening and closing of the red snapper fishery in federal waters off the Texas coast for private recreational anglers fishing from their own boats this year.

The federally permitted for-hire sector, which allows recreational anglers to fish from charter boats or party boats, will remain in its current management structure set by the feds.

As part of this agreement, also known as an Exempted Fishing Permit, Texas must close the fishery when the state’s allotted poundage is reached. The red snapper season can also be closed in Texas if the Gulf-wide total allowable catch is exceeded. TPWD’s Coastal Fisheries Division will be monitoring this fishery throughout the season and will close it when appropriate. The public will be notified of the closings through TPWD’s website, social media accounts and news releases.

So, for the time being, it’s time to gear up, load the boat and head offshore.  It’s no secret that red snapper are one of the most angler-friendly fish we can catch offshore. They can be caught around just about any type of bottom structure such as rocks, wrecks, mud lumps and man-made reefs.