Browse: Home   /   DEALING WITH A DROUGHT 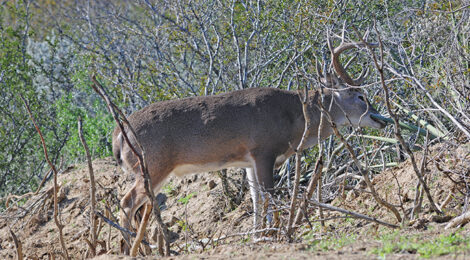 DEALING WITH A DROUGHT

Rainfall plays a critical role on antler size, but it is not the only factor affecting antler size.

I doubt there is a topic discussed more often by serious deer hunters than rainfall because of its impact on antler size each fall.  Deer require food, cover, and water, and quality habitat represents all three, but without precipitation, particularly in the spring and early summer months, those vital elements become limited and have a negative impact on antler size and fawn survival.

A number of management practices are employed to enhance habitat, or at least prepare it for the occurrence of ideal climatic conditions. However, without rainfall, especially at the right times, objectives fail to materialize.

The South Texas brush country is a harsh environment for all wildlife, including domestic stock.  It appears to be a desert during the summer months.  But to those who make a living there, it’s a region composed of a rich diversity of vegetation capable of sustaining itself under less than ideal climatic conditions, providing forage and cover for its inhabitants.

The resilient vegetative community responds rapidly to rainfall, yielding tons of forage.  The problem is rainfall is never guaranteed, thus deer herd’s dependence on the vegetation must be maintained within the carrying capacity of the region based not on ideal conditions, but the worst.

As of mid-April, South Texas remains under severe drought.  La Nina has been around since 2020, and according to climatologists, it intensified in early 2022 and will persist throughout the summer, rendering a pessimistic outlook for rain.  Weather forecasters not only agree that fewer showers occur in La Nina years, but risks of severe weather, including hail storms and tornadoes, exist.